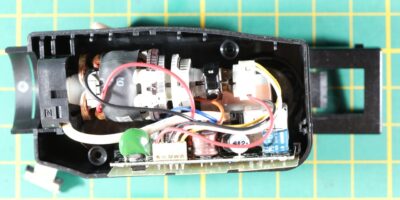 Found this mini CRT inside a Sony CCD-F385E Video Camera, but the driver board of the Electronic View Finder unit needed some new capacitors (and brightness adjust after).

Camera came in a bag (rather tedious to carry from the flea market back home), with two batteries (which will go directly to the Recypark), with the original charger, remote and with the RFU-90E AV adapter.

Camera itself looked nice and complete (except of course the mic cover which seem to decompose in time):

Having a look inside the Remote Control was a turn off. I could not take the battery cover off, it looked jammed. I had to pull it apart almost breaking the entire case and surprise surprise, batteries leaked so badly that the discharge hardened like a glue.

I’ve tried powering on the camera with the Power Brick and its battery adapter, and although the camera turned on (and I could see the lens rotate trying to focus), there was absolutely no image on the viewfinder..

To dismantle the camera was rather straightforward – no hidden catches.

Thankfully, the plug where the EVF flat cable was connecting was a through hole type, would would allow signal connection much easier once the EVF unit is taken out of the camera. So I decided to de-solder it:

Opening the EVF unit is a must when trying to locate the signal pins (at least VCC, GND and Video In). At first view, the CRT is a model CITIZEN 2400-10.

On a closer look, another marking is visible, although I had to take few pics to try to put it together:

An interesting tidbit is that the service manual (that I found online here) has a typo when it comes to the name of the part. The letter ‘O’ (from Oscar) is reported as ‘9’ : M91JY260WB:

As you can see in the photos above, the one on the CRT is ‘O’. However, I doubt anybody is on the lookout for this CRT as a spare part 🙂

The CRT exhibited the same behavior as inside the camera, no image. This is where I started investigating the driver board a little closer. It was another case of ‘creme caramel’ board, as the left side solder connections all were dull – and the top part all brown:

I decided to measure the capacitors in circuit using the Atlas ESR70 plus meter:

As you can see, the two ELNA capacitors (yellow ones) were bad.

The effort payed off and the CRT is alive :). Forgot to mention that the driver IC is AN2512S and that it seems to be the sharpest at 5.2V (drawing 74mA).

One more addition to the collection!