I needed to program few attiny85 chips and decided to use the Arduino Leonardo or Arduino Micro as serial programmers. So I came up with a mini shield that I could mount on either of the two and uses the ICSP header (+a reset pin) to do the job.

Inspiration was this post: https://petervanhoyweghen.wordpress.com/2012/09/16/arduinoisp-on-the-leonardo/ where Peter is actually using the ICSP header to do the attiny85 programmer. After a mini test on the breadboard, it was time to build it! 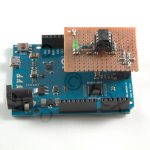 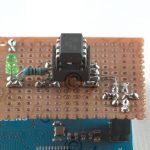 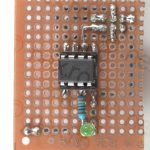 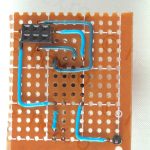 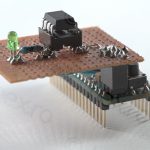 Overview / on Arduino Micro (without the Reset pin hooked up) 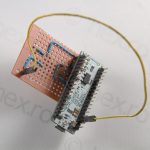 Overview / on Arduino Micro (WITH Reset pin hooked up) 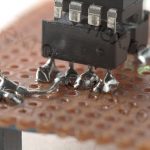 Before start using the “cores” and flash the attiny85 chip, the ArduinoISP (provided within the examples of Arduino IDE) has to be flashed to the Leonardo (or Micro) so that they become a serial programmer. Also, another change is still required, described in the previous post (Step 1) so that Arduino IDE uses the correct protocol when talking with the Leonardo / Micro.

If everything is setup correctly, just before flashing the blink code (below, uses PIN4 of attiny85 for the LED), the menu should look like this: The second problem was surface mounting the components. Since the ICSP female header had to be soldered, it meant that the copper side of the shield would be on top. To get the chip holder, I put a dab of solder and then soldered the rest. To support the LED again I have soldered just a bit one of the legs – but another idea I’ve been told was to try to use toothpicks. Might have worked just as well.

Few more photos from the build process (photos taken with the mobile phone): 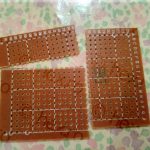 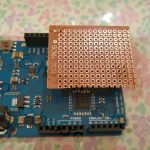 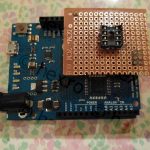 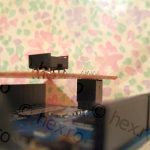 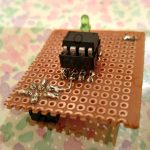 Blink.ino (uses PIN4 on the attiny85 for the led):

If everything works correctly, once the Blink is flashed, the LED on the programmer shield should blink every second.