The Aqua Medic mV Controller 2001C which provides no serial/USB connection to obtain the current measurements or the On/Off state of the pump. Why the need for OCR ?

To help reducing the nitrates in my reef, I’m using an Aqua Medic Sulphur Reactor SN400 (alongside with the Redox Plastic Probe mV PG 13.5 short plus the Aqua Medic mV Controller 2001C controller) and an Aqua Medic SP1500 peristaltic pump to push water through the reactor once the Redox potential drops below the set reference point.

I encountered many troubles with the Aqua Medic SP1500 pumps (hose gets too loose and is pushed out by the rotor, the plastic cross with rollers gets cracked, plastic parts are used inside the gear housing and after a while they make very loud noises when starting and eventually the motor grinds to a halt). Sometimes the pump stops in a position where only one roller pushes against the hose, and allows a little water to still pass – and thus, the reactor gets out of balance (due to a trickle of oxygen rich water entering it).

The mv Controller 2001 C (and its Redox probe) are the most robust one so far – the reading it shows on a large display is the best indicator that something is off. Usually it should stay around the reference point, and if is not – then there is a problem.

With all the randomness described above (not to mention that the Sulphur media gets depleted in time), it would be nice if there were some charts I could check to spot various problems. But how to get the big red -239 value above out of the controller ?

I remembered reading about people that used cameras watching their meters (plus a bit of magic OCR) to keep track of their electricity (or water) consumption. I pondered also about opening the controller up and try to reverse engineer the display logic – it could take a while, is more risky and may leave the aquarium without the help of the reactor.

Thus, the webcam solution (used a Microsoft LifeCam HD-6000 attached to a small tripod, pointing down towards the LCD): 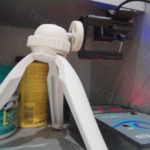 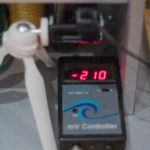 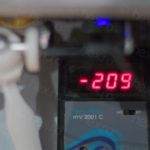 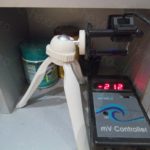 After a lot of reading (will post the links at the bottom of the article) about various ways of doing OCR, I realized the task is very easy. First, the display is an LCD which means the digits stay at the same place, instead of rolling around like in the mechanical meters (camera is fixed too). Second, the LCD is always lit, meaning I don’t need to provide a source of light.

One very usable idea is to sample a pixel within the center of each 7 segment and check its color. If is very bright, then the segment is on. It then becomes a matter of creating a state based on each segment of the digit and then match the state with a real value using a bunch of ifs.

I’ve used: Oracle JDK 1.8 64bit, OpenCV 2.4.11 (with the 64bit opencv_java2411.dll) to access the webcam and Netbeans graphical editor to create a small application: There are some black pixels, just to help with debugging (to see if the relative coordinates of the pixels line up within the digit box). Since the camera is not perfectly straight onto the LCD, each digit box is a bit different than the other, but it still works, allowing me to define the pixels relative to a box, and then just define the position of each digit box: Top right LED turns on when the relay is on – so when the pump is turned on. This is also checked by the code: The most important part is the “OCR” detection below:

The values are sent to Graphite server and below are the results for the last 24 hours: 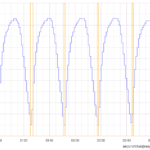 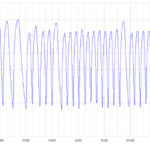 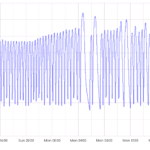