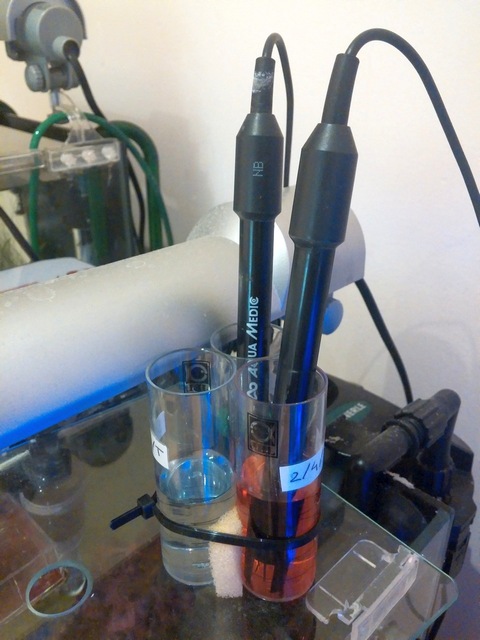 I finally got the Sakura shrimp to reproduce. After a long battle (I could not understand why my Sakura shrimps kept dying) I finally saw the light.

No matter what I have tried, they always died. Not “en masse” but 1 each week, maybe even sooner.
They were dying just before shedding, and a yellow crack was visible behind the head and then the next I usually found them dead.

Although a lot of forums discuss the issue of Sakura shrimp dying, a lot of advice is meant for the beginners and the usual “faux pas”. No copper, check nitrates, check predators, etc. None of these applied to my setup.
It is also believed that Sakura shrimp are just “hand picked” red cherry shrimps (RCS / Neocaridina denticulata sinensi) – so other people comment that they don’t do anything special and their shrimp reproduce like crazy.

However I am not a beginner; I keep planted aquariums for years now and thus encountering beginner advice was a bit of a let down; it seemed I was on my own devices trying to figure the stuff out.

There’s that quote of Sherlock Holmes ” … when you have eliminated the impossible, whatever remains, however improbable, must be the truth?” and believe me, I have tried to change / eliminate everything.
I ran the aquarium without thermometer, changed plants, fed specific shrimp food, switched to fish food, nothing.

I guess my luck / understanding came when I decided to also buy few bee shrimp (Caridina cantonensis sp. “Bee”) which also exhibited the same pattern. On further checks online using the excellent http://www.shrimpkeeping.com/ website, I found out that the bees prefer kH between 0 and 2 and then … I had the epiphany. Sakuras maybe are not just hand picked RCS.

I already had the Reverse Osmosis set up but now I added salts just enough to bring the kH to 1. I’ve also started using the Dennerle Nano Crusta-Fit Vital Substances, but I am sure now the tables have turned: In conclusion, if the Sakura shrimp keep dying / or they do not reproduce, please check your water and try to bring the kH down.